So I was hanging out on Twitter a couple weeks ago and asked followers to hit me up with any questions they might have. This was one of them:

@INCH true or false….CCHA in some form will return in the next 5 years?

It’s a legitimate question, one that couldn’t be adequately answered in 140 characters. I may not do much better using 20 times the characters here, but it’s worth a shot.

Even though we went through an entire round of realignment two years ago, programs that made a flip have a better idea how the current situation works for them. And I believe that, yes, the CCHA will come back in some form. It’s not that anyone is truly unhappy where they are right now.* But there’s going to a team or teams who think they can improve their situations by breaking away or, in the case of the CCHA, re-starting a league.

* Look, I’ve heard the rumblings about Notre Dame not being keen on Hockey East for a variety of reasons, but they’re a better institutional fit in Hockey East—that’s a big deal at Notre Dame—and they’ll draw better crowds against HEA foes than they would against opponents from, say, the NCHC. 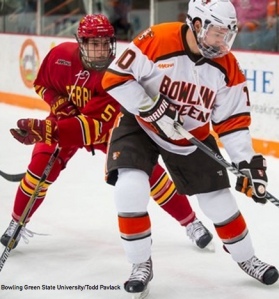 If that happened, wouldn’t it make sense for nearby Ferris State to come on board? And might Atlantic Hockey members Canisius, Mercyhurst, Niagara and/or Robert Morris be open to flipping to a new-look CCHA, lured by the opportunity to offer 18 scholarships as opposed to the 14-scholarship limit imposed by their current league?Bowling Green owns the rights to the CCHA—at least that’s my understanding, and I don’t really know what that entails. That said, is it far-fetched to think Bowling Green, which according to this CBSSports.com story from last November has an athletic department deficit of $11.4 million, wouldn’t explore rejuvenating the CCHA as a way to cut costs? Do you think Western Michigan, which the same article says has a $21.3 million athletic department shortfall, could be convinced to join based on finances?

That’s seven programs right there, enough for this imaginary league to get its playoff champion an automatic NCAA tournament bid. Getting to eight is easy, either by courting Lake Superior State or Miami.

Ah, the RedHawks, the wild card in this scenario. They’re one of the top dozen hockey programs in the country; getting them to commit a new CCHA would be a coup. Would Miami, owners of a $19.7 million athletic department deficit according to CBSSports.com, join fellow MAC members Bowling Green and Western Michigan in a new league? Or do the RedHawks think leaving the powerful NCHC would be a disservice to the hockey program? For that matter, does Western Michigan feel the same way about a move out of Natty Ice?

Arizona State joins the college hockey mix in a couple of years. Where will the Sun Devils land and, if they end up in the NCHC, does it open the door for, say, Minnesota State as that league’s tenth member? Now that the Big Ten has added Johns Hopkins as an affiliate member for men’s lacrosse, maybe that cracks the door for that league to go outside of its boundaries in search of more teams.

This is all just speculation, but the hunch here is conference realignment in the next couple years is more than just possibility, but a probability.

What You Need To Know: Bennett is Union’s current head coach, but he’s not the only East Regional bench boss to man the helm in Schenectady. Providence’s Nate Leaman guided the Dutchmen from 2003-11 and Vermont’s Kevin Sneddon was Union’s pilot from 1998-2003.

Burning Question: Does Union need to change a thing? As long as the Dutchmen keep on keepin’ on, it’s hard to see them failing to advance to Philadelphia in two weeks. No team in the country is playing better than Union is right now and while that may not make them the favorite to win the NCAA title, it certainly makes them the clear-cut choice in this region.

What You Need To Know: Since the Friars’ last NCAA Tournament appearance in 2001, every other Hockey East team has made at least one trip to the national playoffs.

Burning Question: Can Jon Gillies channel his inner Chris Terreri? It’s been nearly three decades since Terreri turned in one of the greatest performances in NCAA Tournament history, carrying a lightly regarded Providence team to the brink of a national championship. For the Friars to get to Philly, they’ll need a similar effort from Gillies, the college game’s most talented goalie.

What You Need To Know: The Bobcats are one of two teams (Boston College is the other) to rank among the top 10 nationally in the four major statistical categories: scoring offense, scoring defense, power-play success rate, and penalty-killing percentage.

Burning Question: Will Quinnipiac try to win the title all at once? A bit of a vague concept–think of it as trying to hit a five-run home in baseball. After playing for the national championship last season, one wonders if the Bobcats will be hyper-focused on getting another crack at the title this time around. As long as they don’t press, the Bobcats pose the most serious threat to Union in the East.

What You Need To Know: The Catamounts enter the regional with 3-10-1 record against teams in this year’s NCAA Tournament field and 17-4-2 mark against non-qualifiers.

Burning Question: Does Vermont have a chance against Union? On paper, the odds are pretty slim. The Catamounts struggle to score; among tournament teams, only Denver averages fewer goals per game, and UVM’s power play ranks 44th in the nation. Unless goalie Brody Hoffman turns in a Tim Thomas-esque performance–with his play, not his political ramblings–the Catamounts’ NCAA Tournament experience will be brief.

Anyone else feel thrown for a loop this month because of the calendar? I suppose it’s because there are five full weekends in March, because it seems like we should be prepping for conference finals this weekend and tuning in to the NCAA Tournament selection show Sunday. But, no, it’s league tournament quarterfinal weekend for everyone except for the Big Ten, where they’re still playing regular-season games.

We’ll take a glance at the Big Ten tournament next week. Front and center now are the playoffs in Atlantic Hockey, ECAC Hockey, Hockey East, the NCHC, and the WCHA. By the way, here’s your link to tournaments results for all six leagues.